The Call of Canada!

Hunting on The Taiga

Let it be said at once. I am really keen on hunting in Africa, in Asia and all around Europe, BUT… There is only one place on the globe that will always hold a special place in my heart, the Taiga. The huge coniferous forests that more or less stretch around the planet in a wide belt, just below the northern hemisphere’s tree line, from the west coast of Scandinavia, to Russia’s Ural Mountains and further east through Siberia, northern China, Mongolia and Japan, before jumping over the Pacific Ocean and continuing in Alaska, Canada and the northern USA. Historically speaking it was not so long ago much of northern Europe was also part of the Taiga, and we don’t have to go far north in Sweden before the northern pine forest begin to take shape.

Perhaps this is why these forests have such a magnetic effect on many people who originate from this part of the world, as evolution had adapted their ancestors over thousands of years to live in the Taiga. This is why many of us understand it better than other parts of the world, and we still feel the pull of its attraction and magic.

The Land of Opportunity

As mentioned above the Taiga stretches over many different lands, but one country stands out because it is nearly all covered by the Taiga, namely Canada… Also Canada is home to a wide range of game species that live in the Taiga, in fact more than any other country that is covered in the Taiga forests. On top of this, Canada has a longstanding history of highly disciplined wildlife management, which allow hunting to be widely accessible and the wildlife populations to improve. Many other countries in the world could learn a lot form how Canada, and for that matter the northern USA, manage their wildlife populations.

Currently it is possible to hunt the following species in Canada: brown bear, black bear, polar bear, puma, lynx, whitetail, blacktail, sitka, wapiti, moose, big horn sheep, stone sheep, mountain goat,wolf, musk ox, reindeer, forest bison and  prairie bison just to name some of the big game species, on top of which you can add small game species such as turkey and some of the world’s best goose hunting. There really is plenty to choose from! 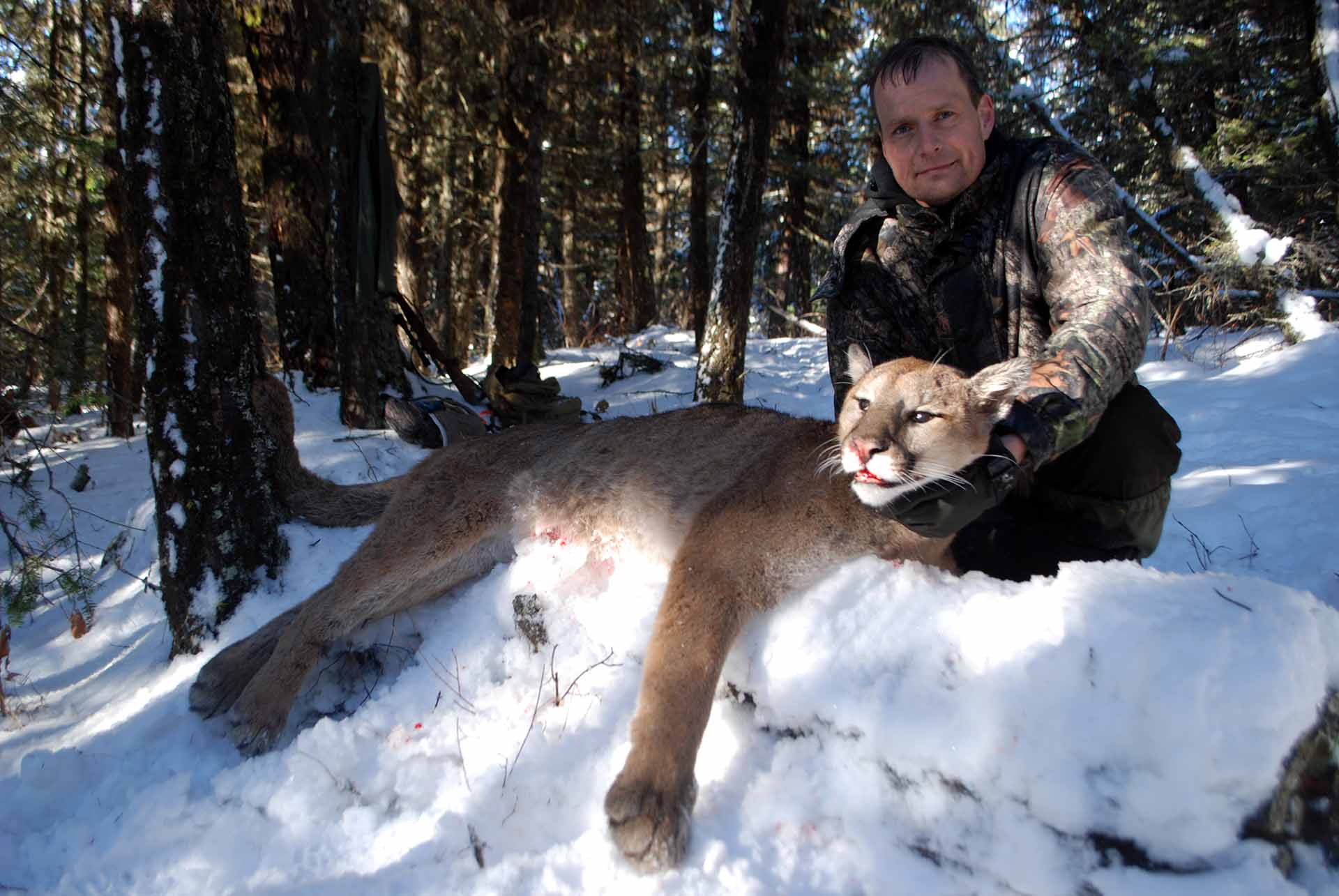 Quite simply hunting in Canada is an experience that every nature lover should have at least once in their lifetime. As mentioned above there are plenty of challenge game species to hunt, but there is also another dimension to hunting here as Canada’s nature is just so impressive, that again and again when you are out hunting here you will find yourself just standing, with a foolish smile on your lips, looking at scenery more beautiful than you could ever imagine, having nearly forgotten about the hunt itself. At the same time it is traditional hunting, you stay in a camp, either in tents or simple cabins, and food is often prepared over an open fire. Sometimes you can even expect to ride on horseback to move around the hunting district.

The springtime hunts for black bear are a particularly good outdoors adventure. At this time of year the forest clad mountains are waking up from their snow clad winter rest and all nature seems to be almost boiling over with life. Even the weather is stable and very good. Sunny days with temperatures of 20 - 25 degrees C are not unusual during the spring’s black bear hunts, but of course much depends on where you are hunting and a which point during the spring, as you can definitely also experience quite the opposite.

Hunting in Canada is nearly always stalking, with the exception of the Puma hunts when dogs are often used. To hunt in the Taiga, following promising tracks, which will hopefully result in a successful outcome, is nearly a magical experience.

Another good argument for going hunting in Canada is that the prices here are actually very reasonable. Of course hunting for mountain goat and big brown bears or polar bears is not cheap, but in comparison with equivalent exclusive trophies from other parts of the world, the price levels here are actually quite reasonable and in Canada you get a colossal hunting adventure thrown in!

At the same time Canada is blessed with a limited but effective and well thought out road network and a myriad of small airports, which makes it relatively easy and quick to get to eve the most far-flung places. On top of this the Canadian people themselves are a very pleasant and very trustworthy folk, which is definitely not an unimportant factor. I have had the pleasure of hunting in Canada a number of times and at all times of years, and there is no doubt that I will return again in the near future!