The homeland of the Ibex

Hunt in the Spanish mountains for Spanish Ibex 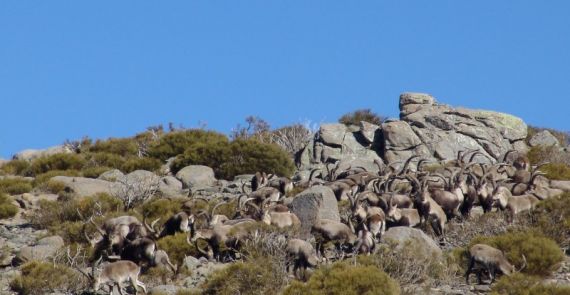 An exclusive, and very interesting hunting destination, which not only offers an exciting selection of game species, a number of which one can only hunt in Spain, but also fantastic scenery, and hunting traditions that stretch back for centuries.

The hunting/ hunt guiding, accommodation and catering are all of a very high standard. You will, as a matter of course, be met at the airport by the hunt organiser who will help in the clearances for you weapons and ammunition before driving you to the hunting district and accommodation.

It is possible to hunt 4 different sub-species of the Spanish ibex: the Gredos ibex which is hunted in the Gredos mountains which lie about a 1.5 hour drive south west of Madrid, is the most classic. The mountains in which the hunt takes place lie at an altitude of between 1500 - 2500m in height. The hunting season for the Gredos ibex is August - April. The very best time to hunt is during the rutting season in November, and during December and January.

The Beceite mountains, which reach altitudes of between 300 - 1200m in height, can be found on the east coast and are relatively close to the cities of Valencia and Barcelona. Here you can hunt another sub-species of the Spanish ibex, namely the Beceite ibex. Presently this ibex is very sought after. As these mountains as relatively low, this hunt takes place in dense vegetation consisting of bushes, oak trees and pine, you will also see traditional Spanish farming with it’s characteristic terraces with vines and orange trees. The hunting season for Beceite ibex is October -May. The best hunting is during the rut in November and during December.

In southern Spain you can hunt the Sierra Nevada ibex and the somewhat smaller Ronda ibex. Both of these sub-species are smaller than the Gredos and Beceite ibex, but this does not mean that the hunt is any less exciting. Their coats are lighter in colour than their relatives to the north, where, especially the rams in the Gredos mountains, ibex have a tendency to get very dark as they get older. The horns are strong, and also beautifully lyre-shaped. Typically they reach a length of between 55 - 70cm. Here the hunt also takes place in really beautiful surroundings, in a mountain landscape between 1,000 - 2,000m in height. The hunting season for these two sub-species is October - May. The best hunting occurs in October, November and December.

As is usually the case with mountain living game, the Spanish ibex is both shy and very wary. After millennia of being pursued by people, eagles, foxes, wolves, lynx and other predators they have developed extremely sharp senses. There senses of smell and hearing are fantastic, while their sense of sight is really in a class of its own. All this together with the terrain they live in make the Spanish ibex a very worthy opponent and a very sought after trophy.

Scientific Name: Capra aegagrus ssp. Sub - species: Recognised by the SCI as a sub-species of wild goat Distribution: The island of Mallorca Habitat: The mountains and coastal areas of western Mallorca Description: A sub-species of wild goat. The males weigh 45 - 60 kg and a shoulder-height of 71 cm, the females are slightly smaller. The general colour of this coat is red-browsed with a...

Hunting in Spain is becoming more and more popular for each passing year. We offer all 4 ibex sub-species; Gredos, Beceite, Sierra Nevada and Ronda. the most sought after are Gredos and Beceite ibex, but more and more hunts are also choosing the to hunt the southern races, the Sierra Nevada and Ronda in combination with a holiday on the Spanish Costa del Sol. Finally we can also arrange cull...

We offer fantastic hunting areas in the Gredos mountains and here our hunters are offered unique experiences on the biggest ibex in Spain, the Gredos Ibex. On our hunts in Spain you get a very high level of service both the hunt and, the stay and the food is excellent. The hunt for the Spanish ibex take place, like all other ibex hunts, in breathtaking mountain scenery. The ibex is light on...

The Balearean goat is only found on Mallorca - on the northern peninsular of Formentor. The unique habitat found here provides the perfect setting for this traditional Spanish mountain hunt. The coat of this wild goat is reddish brown, and the males sport a beard and large, spiral, rear facing horns. Occasionally the females also grow horns.  This species is relatively new in a SCI-context...

In southern Spain you can hunt the Sierra Nevada ibex and the somewhat smaller Ronda ibex. Both of these sub-species are smaller than the Gredos and Beceite ibex, but this does not mean that the hunt is any less exciting. Their coats are lighter in colour than their relatives to the north, where, especially the ibex in the Gredos mountains have a tendency to get very dark as they get older. The...

The Beceite mountains lie at an altitude of 300 – 1200 meters above sea level on the east coast of Spain. The closest large cities are Valencia and Barcelona. Here you hunt Beceite ibex, which is currently a very sought after trophy. The lower altitudes of these mountains means you hunt in dense vegetation, consisting of bushes, oak trees and conifers. Here you will also see traditional...