Over the last few years our driven hunts for wild boar in Turkey have been very successful, with many, BIG boars being shown on parade. Here hunters really do get a lot of exciting driven hunting for their money 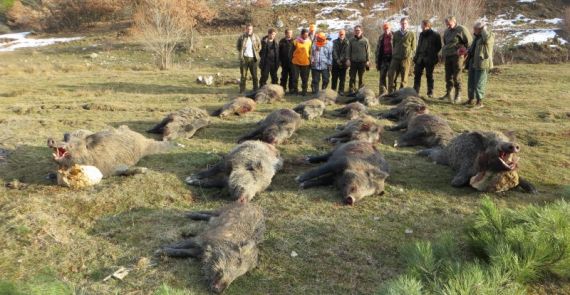 We offer two different arrangements where we guarantee either 25 or 35 wild boar.  Most groups (guaranteed 35 boars) have bagged  between 40 - 60 boars, depending on the individuals shooting abilities and the luck of the hunt.

In Turkey all boars shot - regardless of numbers or size - are included in the price of the hunt, and a refund is made if the group shoots less than the guaranteed number of boar.

Low hunting pressure and wild, open countryside make Turkey an exciting alternative for driven hunt enthusiasts! The local Turkish sub-species of the european wild boar produces some of the biggest “keilers” in the world - as far as both body size and trophy size are concerned. Boar of over 300 kg are shot here every year, and similarly trophies of over 30cm are also taken. The Turkish boar bear no comparison with even the best eastern European boars. trophy sizes of 18 - 25 cm are more the rule than the exception, and often  “keilers” make up a total of 20 - 30% of all the boars shot on our driven hunts.

Driven hunts in Turkey are very different from equivalent hunts in Europe. There are more and bigger “keilers” (the mature tuskers), but general there may be a little longer wait between boars. Typically 5 days hunting here will produce the same result as a 3 day driven hunt in one of the more traditional hunting destinations in eastern Europe.

Because of the local’s religious practices they don’t - as a general rule - hunt wild boar themselves, which has resulted in a relatively dense population of boars, that includes a large proportion of mature “keilers”. To date most groups with a guarentee of minimum 35 wild boars have bagged between 40 - 60 boars ( a few groups more) on a five day hunt, and all boars shot -including keilers of any size - are included in the price of the hunt! The number of boars shot is, as always, dependent on many factors - one of them being the hunters marksmanship.

The hunt takes place in extensive mountainous districts, and is always in 100% open countryside - you never find any game fences on our Turkish driven hunts. For a driven hunt we recommend that the group size is a minimum of ten hunters - preferably more - if the district is to be adequately covered. Typically it is possible to manage 2 -4 big drives during a day, depending on the size of the areas to be covered. Despite the inhospitable nature of the terrain, even hunters who have some difficulty walking can take part in the hunt, as hunters will often be taken to their posts in all-terrain vehicles. Because of differences in size between different areas, and the difficult terrain, hunters should be prepared for a wide variation in the number of boars produced in the various drives.
Sometimes the boars run out of the drive at the back, other times they pass the hunters at a longer range than what is usual on other driven hunts. 150 - 200 meters is not unusual, so bring a shooting stick.

Hunter should also be aware that boars are often culled in farming areas, to limit damage to crops. As the Turks only use the meat in limited amounts, boars that are difficult to bring off the mountain, will often be left where they were shot. Therefore the number of animals on parade does not always reflect the actual result of the hunt. Trophies are always recovered whenever possible.

Finally you should also be aware that the culture in general, and also the hunting culture is very different to f. inst. Poland and Hungary, and therefore the hunts can be experienced as less organized than in other countries. Things aren't always on line, there can be quite a bit of waiting time during the hunt, the beaters can take a little long to get organized and may appear less organized, dogs can be less trained, the search for wounded boars could be better. Further you seldom experience a parade (presentation of the game shot), as known from other driven hunts.Be prepared to improvise.

On the other hand it is a huge and different experience in a fantastic terrain amount very friendly people.

The hunt itself will take place either on districts in Anatolia, around the town of Konya, or close to the Black Sea, near the town of Tokat. Both districts offer beautiful, hilly terrain, lying between 1,000 - 1,500m above sea level. The final decision on which district will be used is taken around 20 days before the hunters are due to arrive, to make sure that the district that is offering the best hunting at the time is used. During the hunt, you will hunt on a number of different districts, that are all in close proximity with each other. accommodation is normally in a 2 - 3 star local hotel or pension.

During the hunt hunters will beaccommodated in 2-bed rooms in a hotel or pension near the hunting area. The stay includes accommodation with half board (breakfast and dinner).If you want a single room, or if you are traveling alone, you will be charged for single room.

Our partner in Turkey has the hunting rights over some very good areas in the Black Sea region and in Anatolia.  Both areas hold big populations of wild boars with a high percentage of big “tuskers”. Both areas are in hilly terrain between 1.000 to 1.500 meters above sea level. The final decision regarding hunting area will be made approx. 20 days before the hunt to ensure the...

Our partner in Turkey, Gönye Hunting Activities is one of the very biggest and most important players in the Turkish hunting market. They have their headquarters in the city of Konya in central Turkey, and in 2017 will be celebrating their 20 year jubilee. Over this period they have built up a large, professional organization with good hunting guides, interpreters, drivers etc. We...

The price is based on a group of 10 hunters. 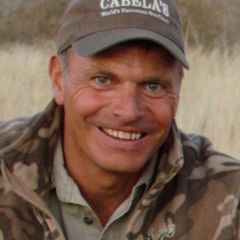