Balearean wild goat, Barbary sheep, Sierra nevada, Ronda or Beceite - which ones will you choose? 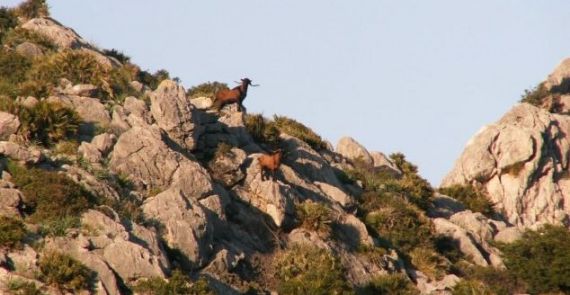 Spain offer a wealth of mountain game - on this tour you can shoot 2 game species on the self same trip!

Like all other mountain game the Spanish ibex is both shy and wary. After countless centuries of being hunted by men, eagles, foxes, wolves, lynx and other predators, they have developed extremely sharp senses. They have fantastic senses of smell and hearing, while their sense of vision is incredible.

This, combined with the terrain they live in, make the Spanish ibex a worthy opponent and a much sought-after trophy.

The hunt itself is classic mountain hunting. Early in the morning, from a vantage point high up in mountains, you will first try and spot the bucks, which are often grazing in lower lying pastures.

You are free to choose between the following species:

Ronda Ibex
The Ronda ibex is slightly smaller than, for example, the Beceite ibex. It has smooth horns are curved at the tips, while it has a lighter coloured coat than the other ibex species. It’s backwards pointing, lyre-shaped horns can reach a length of around 55-70 cm.

Sierra Nevada Ibex
The horns of this species are very similar to those of the Ronda ibex, backwards pointing, lyre-shaped and reaching a length of around 55-70 cm. It is slightly larger than the Ronda ibex.

Beceite Ibex
This ibex is much sought after because of it’s size. It’s horns are large, grooved and grow straight upwards, leaving a large space between them.

Balearean Goat
Only found on Mallorca on the Formentor peninsular. This species is relatively new in a SCI-context  and much sought after. It was brought to  Mallorca around 2000 b.c.. - brought to the island by the Phoenicians, primarily as a source of food. It’s coat is reddish brown, and the males sport a beard and large, spiral, rear facing horns. Occasionally the females also grow horns.

Barbary sheep
Originally from Africa - this species was introduced to Europe in 1970. It’s coat is sandy brown in colour, growing very long in some areas, such as the neck. The horns grow out backwards and outwards, before turning inwards again. Mature animals can be recognised as the horns develop transverse “wrinkles”.

Hunters will normally stay in a charming country hotel close to the hunting district. The hotel offers good facilities, well furnished rooms with private bathroom and toilet, and it’s kitchen serves good Spanish cuisine and fine wines. Spain is also an ideal destination for non-hunting guests. Many of the hunting districts are close to exciting cities with fantastic architecture and a rich...

Hunting in Spain is becoming more and more popular for each passing year. We offer all 4 ibex sub-species; Gredos, Beceite, Sierra Nevada and Ronda. the most sought after are Gredos and Beceite ibex, but more and more hunts are also choosing the to hunt the southern races, the Sierra Nevada and Ronda in combination with a holiday on the Spanish Costa del Sol. Finally we can also arrange cull...

Scientific Name: Capra aegagrus ssp. Sub - species: Recognised by the SCI as a sub-species of wild goat Distribution: The island of Mallorca Habitat: The mountains and coastal areas of western Mallorca Description: A sub-species of wild goat. The males weigh 45 - 60 kg and a shoulder-height of 71 cm, the females are slightly smaller. The general colour of this coat is red-browsed with a...